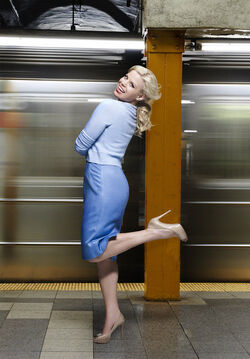 Ivy Lynn (played by Megan Hilty) is a seasoned veteran of Broadway, having performed in the ensemble of numerous hit shows. She is absolutely thrilled to have the chance to work on a new project with longtime friends and collaborators Julia Houston and Tom Levitt, based on the life of screen legend Marilyn Monroe.

Ivy is worried she got the role of Marilyn Monroe because of her relationship with the director. Her friends tell her to stop thinking about it and enjoy the experience of a lifetime. However, Ivy gets replaced by movie star Rebecca Duval and is supposed to come back after Rebecca leaves, but Karen gets cast instead (by boyfriend, Derek Wills.) However, Karen quits the show to be in Hit List and Ivy is given the role again after her recent show Liaisons the Musical closes.

Never Give All the Heart (Pilot)

Who You Are (Chemistry)

I'm Going Down (Tech)
Add a photo to this gallery
Season Two:

Don't Dream It's Over (On Broadway)

They Just Keep Moving the Line (The Fallout)

Dancing On My Own (The Dramaturg)

A Letter From Cecile (The Fringe)

Grin and Bare It (The Transfer)

Feelin' Alright (The Nominations)
Add a photo to this gallery

Let Me Be Your Star (Karen) (Pilot)

History Is Made At Night (Michael) (The Cost of Art)

Cheers (Drink to That) (Karen) (Hell on Earth)

Would I Lie to You? (Karen) (The Fallout)

Hang the Moon (Leigh) (The Parents)

Big Finish (Karen) (The Tonys)
Add a photo to this gallery

Solos (In a Group Number)Edit

The Higher You Get, the Farther the Fall (Hell on Earth) (with Nobert Leo Butz & Unnamed Angel)
Add a photo to this gallery

There’s nothing more important, or special, as live theater.

Retrieved from "https://smash.fandom.com/wiki/Ivy_Lynn?oldid=18140"
Community content is available under CC-BY-SA unless otherwise noted.