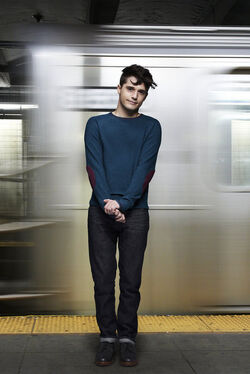 Kyle Bishop made his first appearance in On Broadway. He, with his friend Jimmy Collins, was attempting to create a new rock musical. He and Jimmy were lifelong friends and lived together in Brooklyn. He died in The Producers after being hit by a bus. It is revealed that Kyle had a crush on Jimmy.

He got his associate degree from LaGuardia Community College. Kyle's biggest wish is "a 30 second back" button on conversations, like on a DVR.

The Last Goodbye (The Producers)
Add a photo to this gallery

Solos (In a Duet)[edit | edit source]

This Will Be Our Year (The Fringe) (with Jimmy, Ana and Karen)
Add a photo to this gallery
Retrieved from "https://smash.fandom.com/wiki/Kyle_Bishop?oldid=18497"
Community content is available under CC-BY-SA unless otherwise noted.