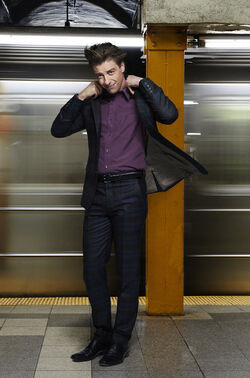 Tom Levitt (played by Christian Borle) has been one of the most colorful presences on Broadway in the last decade. One half of the popular Houston-Levitt team, Levitt lives on Manhattan's Upper West Side.

Tom is first seen in Pilot after returning to New York after he and Julia return after the West End opening of Heaven on Earth. He is very proud that he has a new assistant, and he and Julia have a mock fight over whether Ellis is gay. After catching him reading a Marilyn Monroe autobiography, they begin to talk about how she would make a great musical. he visits his friends at Heaven on Earth and runs into Dennis. He catches Ivy as she comes off stage and in her dressing room after she is turned down for an audition. He asks her to come and record a song for them. After Ellis records the song and it is posted online, Tom fires him. After the reviews for the song are great, Ellis confronts him and asks for Tom to take him back. He does and shares his ideas, playing the 'baseball' number. Tom and Julia are confronted by Eileen who wants to produce the musical. She also suggests that they have Derek direct it, much to Tom's disgust. When they begin to audition for the musical, he asks Ivy to audition, thinking that they should just give her the part.

In The Callbacks Tom continuously suggests that Ivy should be playing Marilyn, shooting down Karen, continuously. During the Callbacks, he shows favouritism to Ivy, telling her she'll be amazing. Afterwards, he tells the group that Ivy was sexy and astounding and would suit Marilyn. At Heaven on Earth, Tom finds Ivy and is extremely happy to tell her that she got the part.

Tom shows the music he has written to Mr. & Mrs. Smith. When the two discuss Michael Swift he asks Julia why she doesn't want Michael. She reveals that she had an affair and he promises to keep her secret. Dennis asks Tom to lunch, revealing that he asked him on a date, not away to get to stay in 'Heaven on Earth'. Dennis lets slip that Ivy is sleeping with Derek, this causes Tom to snap.

During The Cost of Art, Tom goes on a date with John Goodwin after his mother sets the two up.

John and Tom break up because John thinks Tom has a crush on Sam and he does. During Understudy, Tom and Sam start to hang out and are now dating.

Vienna (The Phenomenon)
Add a photo to this gallery

Public Relations (Karen) (The Read Through)

A Love Letter From the Times (Liza Minnelli) (The Surprise Party)

The Right Regrets (The Transfer)
Add a photo to this gallery

Solos (In a Group Number)Edit

(Let's Start) Tomorrow Tonight (The Bells and Whistles) (With Sam, Bobby and Jessica)

Retrieved from "https://smash.fandom.com/wiki/Tom_Levitt?oldid=18389"
Community content is available under CC-BY-SA unless otherwise noted.